Because the simian line tends to develop in the 2nd and 3rd trimester of prenancy (Kimura, 1991), it is used in the perspective of medical science as a potential marker that might be indicative for significant problems during the (early) development of the fetus in the womb - especially when it is not present in the hands of the parents. Thus, the formation of a simian line by principle usually involves a mix of genetic- & circumstantial influences combined.

The simian line became famous for it's significance in Down's syndrome, but in time hundreds of academic scientifc publications have linked simian lines with a 'rainbow' of syndromes, diseases and other medical problems.

Quite a few syndromes have been linked with the simian line. The table below presents percentages for the occurence of the simian line in relatively common syndromes (including patients & controls from various countries):

NOTICE: Quite some of the data above is summarized in:


Other more rare syndromes that are linked with the simian line are e.g.:

Beyond these syndromes (which are usally caused by- or featured with genetic aberations), the simian line has also been related to various (non-)genetic diseases such as: diabetes mellitus (type 1 & 2), familial deafness, leprosy, and rheumatoid arthritis.

Also, the simian is more common in psychiatric populations such as seen in: schizophrenia (psychotic disorders) & ADHD.

But this doesn't implicate that the simian line can be associated with any diseases. For example, auto-immune diseases (which typically have a higher occurence in females than in males) are generally not associated with a higher occurence of the simian line (which is more common in males). Though the hand in diabetes mellitus type 1 could be the exception that confirms the rule! 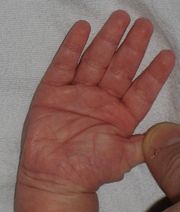 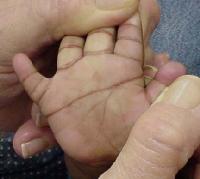 THE SIMIAN LINE BY DETAIL:

• The hand in Extraversion & Introversion